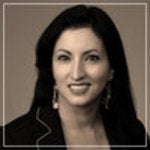 April Olson is a first-generation college student and the first attorney in her family.  She was raised in northern Minnesota but has multicultural roots indigenous to Mexico and Sweden.  April went into the field of law to make a difference and she is a relentless optimist.   Prior to law school, April worked in social services for the Fond du Lac Band of Lake Superior Chippewa.  April's experience in social services working with the Indian Child Welfare Act (ICWA) and children was an inspiration and a catalyst for her journey to law school.

April studied law at the Sandra Day O'Conner College of Law at Arizona State University (ASU).  She chose ASU because of their renowned Indian Legal Program (ILP), which offers an emphasis in Indian law and a nationwide family of Indian law practitioners.   April graduated from ASU with a certificate of Indian law and the National Association of Women's Lawyers Outstanding Graduate Award.

After law school, April began working for the Gila River Indian Community and served the tribe as both a Prosecutor and an Assistant General Counsel. April left the Community to join the law firm of Rothstein Donatelli LLP where she is now a partner.  April's practice is primarily in the field of Indian law, which means she does a wide variety of different things and her work overlaps with other fields including criminal law, labor and employment, civil litigation, dependency law and the ICWA, and guardianships and adoptions.

April finds inspiration in the clients and counselors she works with who continue to fight for tribal sovereignty and the rights of indigenous people.  She engages in substantial pro bono work and serves on the ASU Indian Legal Program Advisory Committee.   April is also a member of the Native American Bar Association of Arizona, the Tribal In-House Counsel Association and the Indian Law Section of the State Bar.