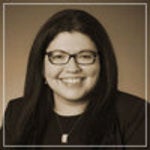 Alicia is a 2007 graduate of the Yale Law School.  Her clinical experience includes successfully representing asylum seekers from Guinea, Rwanda, and Colombia; obtaining a rare grant of asylum for a child seeking asylum alone; winning dismissal of an unlawful reentry indictment brought against a Haitian refugee removed following a drug conviction; and representing indigent clients in antidiscrimination and domestic relations cases.

Alicia also has both a B.A. with Highest Honors and an M.A. in English from Stanford University, where she received the Andrew Smith Memorial Essay Prize for her master's thesis, the Robert M. Golden Medal for Excellence in the Humanities and Creative Arts for her honors thesis, and the Gordon A. Craig Prize in History.

She is admitted in New Mexico and Arizona.