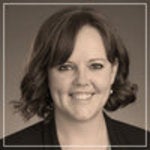 Caroline "KC" Manierre is an associate in the Santa Fe office who joined the firm in 2016. Her practice focuses on civil litigation, federal Indian law and tribal law, civil rights litigation, and professional licensing matters. Prior to joining the firm, she worked as an Assistant Attorney General for the New Mexico Attorney General's Office, where she gained valuable experience in administrative law, including licensing and regulation issues, the Open Meetings Act, and the Inspection of Public Records Act. Before law school, Ms. Manierre received her bachelor's degree in International Studies and Spanish from the University of Denver.