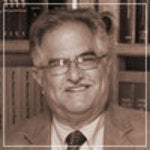 Bob Rothstein was a founding partner of the firm in 1976.  His practice focused on complex civil and criminal litigation, with an emphasis on civil rights, catastrophic injury, commercial and business torts, and white-collar criminal law.  He was a frequent speaker and instructor on topics of trial practice and substantive law.

All of us at Rothstein Donatelli will forever miss Bob's presence, but his spirit and his legacy live on.