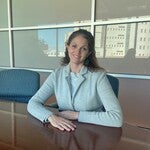 Carey Bhalla is a Mississippi native who moved to the Land of Enchantment in 2006 to start her legal career at the Public Defender's Office, where she represented hundreds of clients in felony cases including homicides, trafficking, sexual offenses, robberies and general felonies.  After opening her own firm in 2009, Carey developed her civil rights practice while continuing to litigate complex criminal cases. Carey's enthusiasm for criminal defense work and civil rights litigation is deeply rooted in her experience growing up in Mississippi, where she watched the disenfranchisement of her fellow Mississippians in the education system. Carey's father, a journalist in college and a lawyer himself, inspired Carey with his stories of exposing KKK members in the local newspaper and interviewing James Meredith in his dorm room at the University of Mississippi during the integration of the school.

Good lawyering is a lot like investigative journalism, and Carey works hard to uncover the truth in her cases, often proving that the police agencies, school systems, and governmental agencies often work to undermine fundamental constitutional rights in both criminal and civil cases.  Holding governmental agencies to account is important to Carey, and she focuses on that in all aspects of her litigation practice.

United States Court of Appeals for the Tenth Circuit

United States District Court for the District of New Mexico